Nils Olav the most famous king penguin in the world, parades his way to a new honour 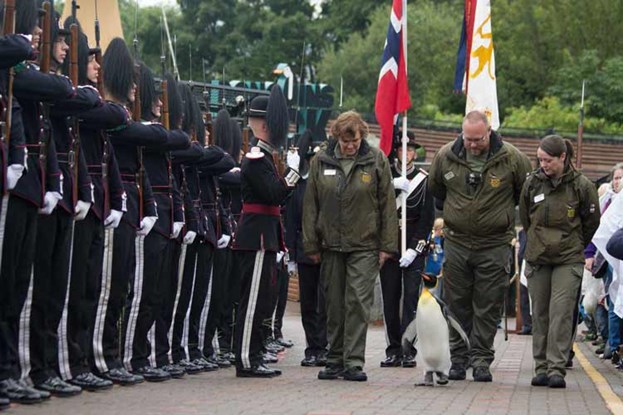 On Monday morning, 22 August, His Majesty the King of Norway’s Guard paid a very special visit to RZSS Edinburgh Zoo to bestow a unique honour upon our resident king penguin Sir Nils Olav. Already a knight, the most famous king penguin in the world was given the new title of “Brigadier Sir Nils Olav”.

The prestigious title was awarded during a special ceremony which was attended by over 50 uniformed soldiers of His Majesty the King of Norway’s Guard, who are taking part in The Royal Edinburgh Military Tattoo this year. Sir Nils paraded his way up Penguin Walk, whilst inspecting the soldiers of the Guard.

The regal, black, white and yellow bird is the mascot of His Majesty the King of Norway’s Guard and in 2008 was awarded a knighthood, an honour approved by King Harald V of Norway.

Barbara Smith, Acting Chief Executive Officer for the Royal Zoological Society of Scotland, said: “We are honoured to host His Majesty the King of Norway’s Guard as they bestow a prestigious new title upon our king penguin, Sir Nils Olav. It is a very proud moment and represents the close collaboration between our two countries, Scotland and Norway.” 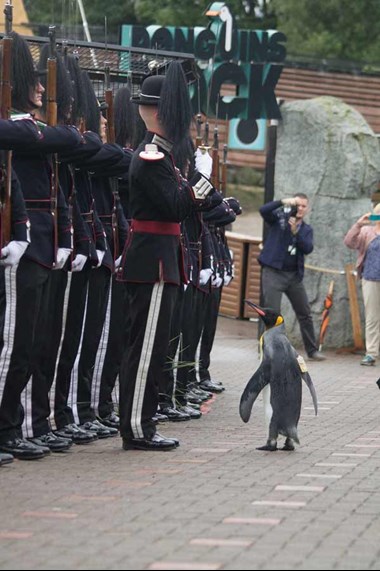 Brigadier David Allfrey, Producer and Chief Executive of The Royal Edinburgh Military Tattoo, added: “This is just a simply fantastic example of the great relations between our two countries, and it couldn’t be a more charming tradition.  At the Tattoo we of course have many inspecting officers but this is by far my favourite. Congratulations, Brigadier Olav!”

The Guardsmen visit Sir Nils every few years while they are in the city performing at The Royal Edinburgh Military Tattoo and give him a new promotion. Since his adoption in 1972, he has worked his way up the ranks, starting at Mascot, before being promoted to Corporal in 1982, Sergeant in 1987, Regimental Sergeant Major in 1993, Honourable Regimental Sergeant Major in 2001, Colonel-in-Chief in 2005, Knighthood in 2008 and now Brigadier Sir.

Photos from the event can be found here: https://www.dropbox.com/sh/gb3lnqrys5o5cdd/AAAX5sgmn7b_qm02JbXuUZW6a?dl=0

These are free to use, please credit RZSS/Katie Paton.

This is free to use, please credit RZSS.

About RZSS Edinburgh Zoo and the Royal Zoological Society of Scotland

Gavrielle Kirk-Cohen, PR Coordinator for the Royal Zoological Society of Scotland, on 0131 314 0383 or gkirkcohen@rzss.org.ukOR media@rzss.org.uk