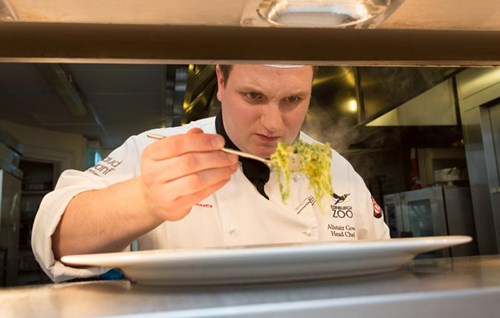 Ally MacDonald has just celebrated his 29th birthday, yet he has already racked up 17 years’ experience cooking for and with the best, including chefs Jon Paul, Albert Roux, Gordon Ramsay and Tom Kitchen. He has served celebrities, heads of state, HRM The Queen and our most recent Tribal Elder (and Royal Patron) HRH The Princess Royal, whose security staff passed along her personal compliments to Ally on the night.

Ally’s gift for creating imaginative and delicious dishes using the best of Scottish produce – Quality Meat Scotland (QMS) and Red Tractor British poultry, for example – has won him two gold medals as Compass Chef of the Year Scotland 2012 and 2013, and the prestigious “Most Passionate Person within the Compass Company” award in 2014. 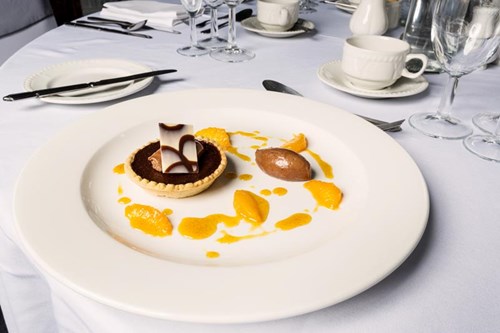 So where did all this passion for cooking begin?

Aged 12, the youngest son of five children, Ally marched into the local bakery in his hometown of Grangemouth to plead for a job. Independent, fond of food and in search of pocket money, he landed the Saturday-Sunday shift making rolls for £16 a weekend. His weekend rolls quickly earned him the 5:30-8:30am baking shift on weekdays before walking to school, a rigid discipline he kept up for the next five years. As Ally says, “I was so fortunate. You could never find that chance now, but it was a marvelous experience and I learned so much.

Due to his baking job commitments, Ally missed the Home Economics exam at school, so had to sit it alone. When he received the highest score for that year he thought, “Wow, I need to do something with this!”

When questioned about his signature dish, Ally’s face breaks into a huge smile, and his eyes literally twinkle. Gressingham Duck, his bronze medal winner at Scothot 2007. “I love the heartiness of the seasons of autumn and winter, the game, the thick breads, the sauces, and it all comes together beautifully and magically for me in that dish.” I sense in his voice and his passion a real alchemist is at work. 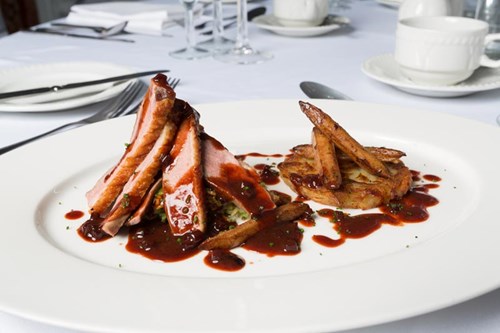 Ally gives huge credit to the chefs he was lucky enough to train with early on, especially Joe Queen, President of Chefs for Scotland, and John Paul. “I soaked up everything they gave me like a sponge.”

Now Levy Restaurants Cluster Head Chef, Ally not only oversees all catering for RZSS Edinburgh Zoo, but also mentors the chefs and provides food concept development for a host of the company’s cafes, including another Zoo in Bristol.

When asked about the benefits of his RZSS Residency, Ally admits, “It really helps to strengthen the partnership between Compass and Edinburgh Zoo. Opportunities to cook for Roar and Snore, Zoo Nights, the Bee Festival, Residency Salon and Princess Anne have all been great challenges, and great fun.” He is also on a mission to help bring the zoo kitchen as close to palm-oil free as possible.

Curious about Ally’s biggest satisfaction thus far, I was surprised and delighted by his answer. “It’s not something I’ve done. It’s giving back where someone’s given something to me.” He goes on to describe a “big, lovely, teddy bear of a lad” he trained, taking him under his wing at an early age. Ally enthuses, “He listened and he took absolutely everything in. His enthusiasm for our profession was admirable.” His protégé has now gone on to become Head Chef for racing driver Lewis Hamilton and team Mercedes Benz. Ally smiles, “Very pleasing! He still calls me Chef.”

Until he started cooking, Ally describes himself as that “quiet, shy guy.” He admits, “Cheffing really brought me out of my shell.” Knowing Ally both for his culinary passion in the kitchen, and his jovial and competitive streak when we shared the football pitch on DreamNight, I can only thank that wise baker in Grangemouth for giving him that first chance to leave the comfort of his shell and to blossom!

A great enthusiast, and a genuine talent, we are lucky to have Ally as one of our Residents.

So be sure to get your tickets for Chef Ally’s “Feeding Time at the Zoo” innovative dinner on 1 April to enjoy a menu inspired by what our penguins, chimpanzees, sun bears and big cats eat, finishing off with panda cake petit fours!