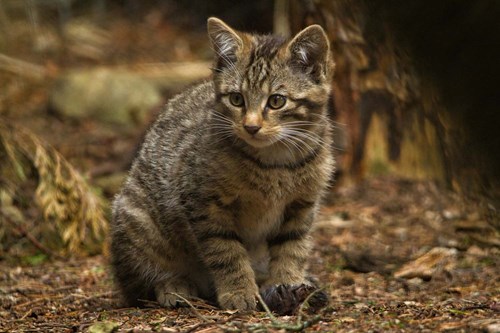 Three rare Scottish wildcat kittens were born at RZSS Highland Wildlife Park on 11 April 2017. The new arrivals – born to mother Ness and father Zak – are the eighteenth, nineteenth and twentieth  kittens to be born and reared at the Park over the past four years, making a vital contribution to collective efforts to save the species from extinction.

Also known as the ‘Highland Tiger’, this incredibly rare native species is facing the very real threat of extinction due to hybridisation with domestic and feral cats, habitat loss and occasional persecution. However, as a result of coordinated conservation efforts and a conservation breeding programme for eventual release, the species has a fighting chance of survival.

The wildcat kittens have spent the first couple of months safely tucked in their dens, but are becoming slightly more independent of mum now. They are enjoying exploring their enclosures and the overhead tunnels, and exhibiting kitten-like behaviour such as play fighting as they begin to refine their motor skills.

Douglas Richardson, Head of Living Collections at RZSS Highland Wildlife Park, said: “The three female kittens are another important addition to the captive population. Fathered by wild born dad Zak, who came to us as an abandoned kitten in 2012, they possess genes which are valuable to the population and will allow new breeding pairs to be established in the future.

“Born in April, the three youngsters are becoming more confident as they settle into their surroundings, and can be seen in the Forest Habitat at the Park. Our plan is that they will go on to play an important role in the conservation of the species and, with possibly as few as 110 wildcats left in the wild, the importance of a well-managed captive population cannot be overstated.”

RZSS Highland Wildlife Park has a strong track record in breeding the Scottish wildcat, having reared over 50 wildcat kittens in the last 37 years. Our breadth and depth of expertise will be critical in protecting Scotland’s last remaining native cat species from extinction, as a robust captive population is likely to be crucial to the survival of the species.

RZSS is a key partner in Scottish Wildcat Action, the first national project to save the highly threatened Scottish wildcat from extinction. Scottish Wildcat Action brings together more than 20 other organisations in the conservation, scientific and land management communities – supported by Scottish Government and the Heritage Lottery Fund – and represents the best chance the wildcat has of surviving in the long term.

Alongside our work leading the conservation breeding for release aspect of the project, RZSS’s WildGenes laboratory is currently developing a unique molecular studbook for the species, having collected genetic data from over 70 breeding wildcats in captivity. This will provide more detailed information on the relatedness of the population whilst informing future breeding decisions and ensuring that the best possible matches are made to create a genetically diverse population.

Although some similarities with domestic tabby cats exist, the two species are not to be confused. The Scottish wildcat is the same subspecies of wildcat as is found in continental Europe, but has been separated from them since the end of the last ice age, around 9,000 years ago. Domestic cats originate from Near Eastern wildcats and have been through a process of domestication. Hence they have a quite separate evolutionary history to Scottish wildcats and behave quite differently. Wildcats are less social, generally just coming together for a short period for breeding, normally giving birth to two or three kittens, which the mother will protect fiercely.

With their big, bushy, black-ringed tail and tenacious behaviour it is no surprise that the Scottish wildcat was used historically in many Highland clan crests. The Scottish wildcat is one of the rarest populations of cat in the world and is critically endangered in the wild. The long-term future of the Scottish wildcat relies on local people reporting sightings of any cats living in the wild, volunteering and spreading the word about the conservation challenge facing the species.