Despite a recent assessment from the IUCN Cat Specialist Group (https://www.nature.scot/wildcat-scotland-review-conservation-status-and-activities) confirming the perilous status of the wildcat in Scotland, there is fresh optimism for their long-term recovery. Building on the successes of the current wildcat conservation project, Scottish Wildcat Action (SWA), due to end in 2020, here at RZSS we are developing plans to deliver the first UK reintroduction project for the species.

Whilst this is clearly an exciting time for the species, the cause for optimism does not stop there.

Keeping it in the family

After a short period of settling in to her new home, Lossie gave birth to two healthy kittens. One has left the Highland Wildlife Park to start his own family and the other, known as Katrine, stayed with us.

Following careful population management planning, we decided to pair Katrine with a young male born the same year from one of our other breeding pairs at the Park. This pairing would give yet another opportunity for her mother’s rare genes to pass through the captive population and boost genetic diversity.

We know from our many years of management and breeding that wildcats can reproduce in their first year, so despite the young age of this pair we remained hopeful that they too may have kittens.

As seen on screen

To ensure all wildcats housed in the large, natural and remote conservation breeding enclosures can retain and develop their wild behaviours away from humans, the animal keepers monitor them using remote cameras. The videos captured are viewed each day by staff and volunteers, with specific details and behaviours recorded in a database.

It goes without saying that our hopes were lifted when Katrine was captured on video with what appeared to be a rather large abdomen, indicating that she may indeed be pregnant. As the weeks went by there was no sign of her having given birth and thoughts of a miscarriage or even a false pregnancy crossed our minds. But at the end of May we were delighted to capture footage of Katrine moving a young kitten back into her nest box. It was just one kitten, but it was alive and her mother was moving it with the care and protection needed.

Video after video, staff would see Katrine occasionally moving her kitten. However, it soon became clear that she was either moving one kitten a lot, or there was more than one kitten. As the weeks passed and as the number of videos viewed increased, we were shocked to find she had another kitten… and another… and another…yes, four kittens from this young first-time mother, absolutely incredible!

During our close observations of Katrine, staff continued to monitor daily videos of her mother Lossie, who was still paired with the male from Camperdown. Although staff were seeing both these cats each day and recording behaviours, there was no obvious sign that she too was pregnant or was using her nest box.

However, Lossie had found a natural den site under a dense bush which provided protection and shelter where she had quietly gone about her business and given birth. This time producing a healthy litter of three kittens, her second since arriving in the conservation breeding programme.

With all seven kittens continuing to go from strength to strength and our plans for the reintroduction centre developing, it is easy to see why it is such an exciting and optimistic time for wildcats!

Stay connected with all the new developments at www.rzss.org.uk/wildcats and www.scottishwildcataction.org 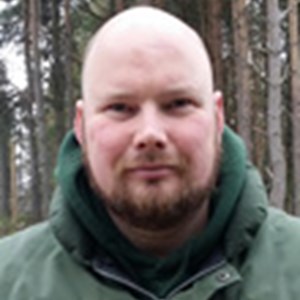 David has been with RZSS for over 10 years. Initially he worked with primates at Edinburgh Zoo, before specialising on the carnivores, and becoming a Senior keeper at the Highland Wildlife Park. He currently coordinates the EEP for Pallas's cats whilst also holding the ISB for the past 4 years. David's background, current position on the EAZA Felid Taxon Advisory Group and as a member of the Pallas's cat working group provides a great platform for his position as Cat Conservation Project Officer which currently focuses on the Scottish wildcat project and a new collaborative project with Pallas's cat and Snow leopards. View profile