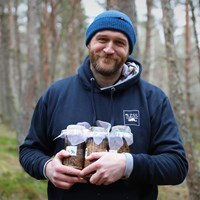 Carl has a varied background, ranging from snowboard instructor in Japan to leading divisions in logistics. He decided to retrain in 2015 and completed a Forestry and Conservation course at the University of the Highlands and Islands as well as studying for the RHS Level 3 Principles of Plant Growth, Health and Applied Propagation. In the final year of his studies, Carl worked in a graduate placement at Highland Wildlife Park, assisting with conservation work across the park.

Carl is passionate about plants and with that, the invertebrates that thrive alongside them. He is particularly interested in restoring habitats to become more species rich and more resilient for the future.

HND (University of Highlands and Islands) Forestry and Conservation